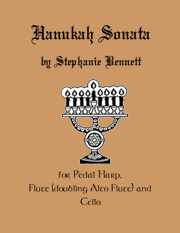 The traditional holiday tunes that we hear every year, and that we musicians play every year, inspire me to experiment and innovate, to find new ways of interpreting them which do justice to their timeless spirit and yet entertain by offering a fresh and creative perspective. It was in this spirit that I composed the Hanukah Sonata.

The piece is in three movements played without interruption. It is based on three traditional Hanukah songs; the first and third are joyous and fun songs of the "let's have a party and play with dreidls" variety, and the second is a solemn and reverent blessing sung at the ceremonial lighting of the candles in the evening.

The first movement is a set of variations on "Sevivon". From an energetically disjointed introduction, it launches into a few dancelike statements of the theme, with bouncy rhythms and jazz-age harmonies. A moment later the style is suddenly Baroque, with canonically overlapping statements of the theme by the three instruments, including a retrograde treatment by the viola. There is a brief recapitulation with a send-off of playful dissonance from the viola.

The reverent and dignified second movement (based on the melody of the traditional "Blessing over the Candles") is warmed by melodies played on alto flute, the low register of the viola, and rich chords on the harp.

The third movement is playful again, with the familiar "Hanukah O Hanukah" reinvented in 7/8 meter. The harp plays with fun techniques including notes doubled by enharmonic equivalents, grace-notes "hammered-on" in imitation of guitar technique, and phrases of four eighth notes juxtaposed against the seven eighth notes of the meter. The ensemble builds to a melodramatic peak topped off by a dramatic harp cadenza, then ends in a lighthearted mood with a sudden return to the quick and playful 7/8. 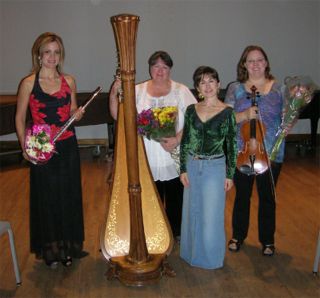