HARP JOKES (I have to confess, most of these have been transposed from jokes about other instruments!) And don't worry, any ribbing/roasting is intended good-naturedly; no harps have been harmed in the production of this page!

What's the range of an out-of-tune lap harp? 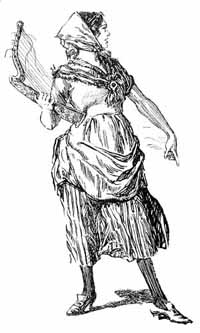 About ten yards, if you throw hard enough.

What's the difference between a Celtic Harp and a Concert Grand Pedal Harp? 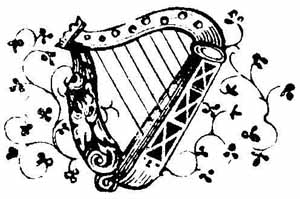 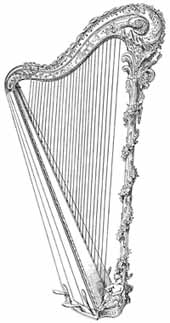 How can you tell when a harpist is playing out of tune? 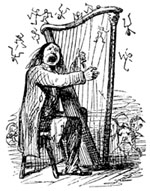 What's the difference between an out-of-tune harp and a trampoline? 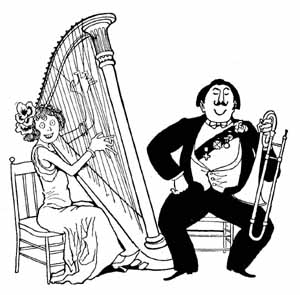 You should take off your shoes before jumping on the trampoline.

What's the difference between an out-of-tune harp and an onion?

Someone might cry when you cut up the onion. 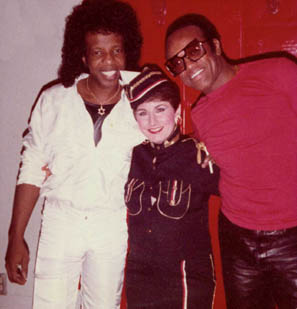 Back in 1984, I played harp on a concert tour with Bobby Womack and Sly Stone.

Bobby's friends in high places often invited the whole band out for a night on the town.

In Detroit, a friend of his by the name of Samuel Frank who owned a nightclub invited us all over after a concert.

Since we had all our instruments in the tour bus, the crew brought them into the club for an impromptu jam session.

Mr. Frank dismissed the DJ for the evening and we played for a clubful of dancing fans.

Drinks for the band were on the house and a rip-roaring good time was had by all.

Exhilarated and a bit tipsy, I got back on the bus assuming the crew would take care of loading up my harp -

and I guess the crew assumed I'd taken care of it.

No one noticed the oversight till the next night, when it was time to go onstage at the next venue.

Glancing out at the stage as the house lights went down, my heart sank as I realized what had happened.